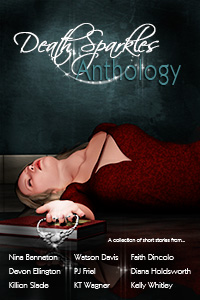 Several of the DEATH SPARKLES contributors were able to take the time to answer some questions about the process. It’s always fun to see how these things evolve!

Devon Ellington: How did the story spark from the prompt and grow?

KT Wagner: I was googling related phrases, desperately searching for inspiration, when I came across a news story about a young man in New Zealand who had purchased a diamond ring, and then his girlfriend rejected his proposal. He set up a treasure hunt and gave the ring away, but not before he created some controversy by profiting from click-throughs – money he donated to charity.

Faith Dincolo: I found the process of visualizing a dead woman with diamonds dangling from her hand, to be fertile ground for creativity. In “Persephone’s Progeny”, the diamond necklace was a catalyst for Persephone to grow as a robot. The prompt really helped me to think outside of my usual story telling process. I would recommend a prompt to anyone struggling with writer’s block, as it opens up the creative flow.

Diana Holdsworth: When we got the prompt, I was rusty at short story. My first version came out like the compressed outline of a novella. The necklace was used as an example of greed over common sense, and the prompt line was stapled in near the end of the story. I brushed up on my short story skills and realized the first version wouldn’t do. Starting from scratch, I tried again, but nothing came. I didn’t think I could manage it. Then I reached back into my life and a tale came to mind that resonates for me on a deeply emotional level. The story poured out with ease. The necklace in “A Girl’s Best Friend” stands for something quite different from the one in the first version. As for the prompt line, no staples required.

PJ Friel: I’m not a fan of horror so when I read the prompt, I knew it was going to be a challenge for me. My solution for this was to discuss the prompt with a friend, Jessica. I find that my imagination really kicks into gear during lively conversations. Focusing on the necklace and the meaning behind it was key for me. What was so important about that necklace? Jessica and I threw around some ideas and then I went home to begin my research. With some facts and pictures in hand (visuals are very important to me), the story started to flow. Oddly enough, I really didn’t know where the protagonist was going to take me. I always know the ending of my stories, but not so with this one.

Killion Slade: As soon as I read the prompt, I immediately knew I didn’t want to write a simple murder scene. My horror muse truly wanted to be fed and pushed me out of my comfort zone. I wanted the piece to seem surreal, confusing, a bit disorientating, and downright uncomfortable. From initial beta readers, I was asked to take the story further, deeper, and then once I added sensory elements, it truly took off on a life of its own.

Nina Benneton: A day before the assignment was due, I’d listened to a conversation between two sisters and their dialogue was so rich, I went home and fictionalized the characters, taking advantage of the dialogue’s rhythm.

DE: What was the hardest thing about writing to the prompt?

NB: This particular prompt screamed mystery or thriller or horror to me, but my muse was not cooperating. She wanted humor instead, so I relented and let her be. After all, I had a deadline.

FD: How and where to place the prompt was a big issue for me. I wanted a seamless use of the prompt that didn’t jar the reader and make them say, “oh yeah, there is the prompt.” This was a challenge for me, because putting the prompt as the first, or last sentence, seemed very appealing. Make it obvious and blatant, then this little voice in me asked, “is the prompt more important than the story, or vice-versa?” When I wrote the story, the prompt fell naturally into place at the dark point of the story.

PJF: The hardest part about the prompt was that it didn’t come from within. It’s difficult for me to take someone else’s idea and build around it. This prompt was especially hard because it was drawing me into a genre that I avoid. I could have worked the sentence into a fantasy story, which is my chosen area, but I felt that the point of the prompt was to write something outside of the norm. I’m glad that I didn’t take the easy way out. I don’t think I would have been nearly as satisfied with the results.

DH: I knew the story I wanted to tell before I knew where to put the prompt line. The muse is a subtle creature: I believe my creative self understood where the prompt line was meant to go long before my conscious self did. During the writing process, my big worry was that the prompt sentence would stick up like a nail in the road. By the time the story was done, the prompt line slipped into place naturally.

KS: I would say the hardest thing about the prompt was the tense. Writing in first person created a challenge to meet the prompt. It also was the style of the death. Immediately, when I think of diamonds dangling from a dead woman’s hands, I think of her stealing them, getting caught, and being poisoned in some sort fashion. So trying to come up with a unique situation for this woman and why she was dead and had diamonds dangling that was not cliche’ in my mind was indeed a challenge.

KTW: Other than some terrible cliched ideas, I floundered around seeking inspiration for far too long. I remember one night lying in bed staring at the ceiling and playing word association games when I should have been sleeping.

DE: Do you see these characters in any other pieces besides this story?

NB: Not until this question. Hmm. I think I might like to see Catarina and Nipolita showing up to help the priest at the orphanage in Guatemala.

KS: Devon Ellington taught us how we can use our short stories to ‘put the feelers out’ for new characters. Let them try on their story, so to speak. We also learned how to incorporate older characters into new situations where we normally wouldn’t see them in, to find out more about what drives them. I have not considered writing more for these two characters in “The Trophy Wife”, but it could becomes a twisted little mini-series of short stories based around the unique world built for them.

PJF: While the protagonist is certainly an interesting character, I don’t think I could spend an entire novel inside her head. It’s a rather scary place inside her noggin and I’m a big chicken.

KTW: The motivations and rationalizations of people like the main character fascinate me, but no, I won’t be writing about these particular characters again.

FD: I always see my stories as bigger pieces. Short stories really turn on the creative flow, and get me thinking about all the possibilities that I could do with that story. I find that it can be very difficult to write a short story, because the story wants to grow. I envy short story writers that can see their stories in a few pages.

Nina Benneton always wanted to be a priest and save orphans in third-word countries, but ends up writing romantic comedies; for now. Visit her at www.NinaBenneton.com.

Faith Dincolo writes horror, sci-fi comedy, and creative non-fiction. She can be found at https://www.facebook.com/FYDincolo.

PJ Friel is a writer and artist, dwelling in the land of fantasy. Visit her online at http://www.amberstar.net.

Killion Slade comprises of a married writing team who met in the virtual realms of Second Life and virtually enjoy everything. Read More at http://www.killionslade.com.

KT Wagner writes science fiction, Gothic horror and steampunk, novels and short stories, with the occasional forays into other genres and her garden. Visit her on-line at http://www.northernlightsgothic.com

I publish under a half a dozen names in both fiction and non-fiction. View all posts by devonellington